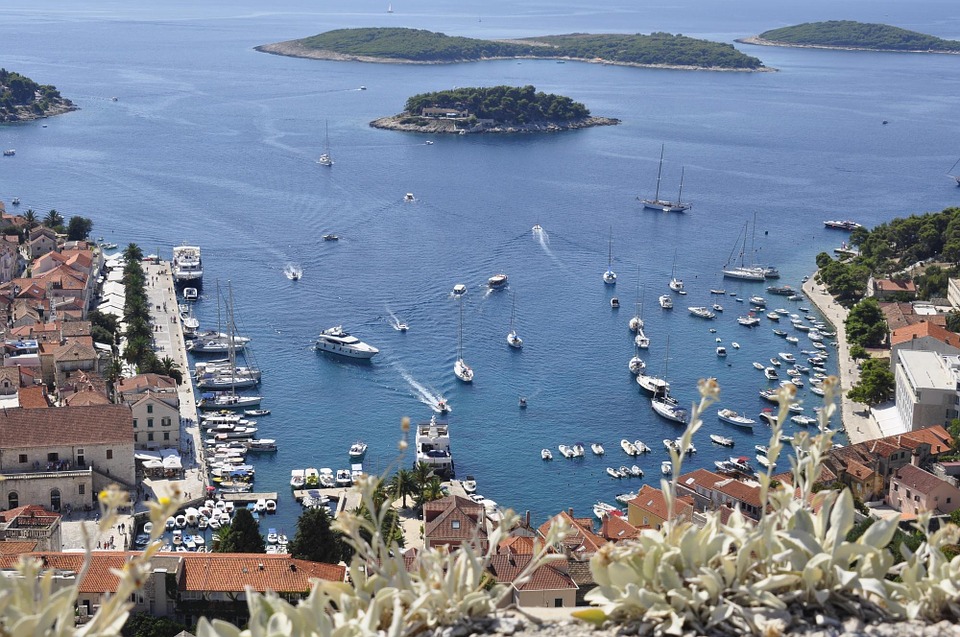 HVAR, an island in the central Dalmatian archipelago; area 299.6 sq km (length 67.5 km, width up to 10.5 km); population 11,459. In front of the western part of the southern coast of Hvar are Pakleni Otoci (Pakleni Islands), and in front of the middle part the island of Scedro. A crest stretches across the middle part of the island, with the highest peak Sveti Nikola (St. Nicholas) (628 m); north of it is the fertile Velo Polje (Big Field). The northern coast of the island, with the spacious Stari Grad Bay and a number of coves, is much more indented than the southern.

The island is characterized by mild Mediterranean climate. The air temperature in the winter months is 9.1°C, an average air temperature in January is -8.4°C and in July -24.8°C. Hvar has a long insolation (2,718 hours of sunshine a year). Snow occurs very rarely; in January there are five snowy days in ten years and in February only three. The forest vegetation, which in the past comprised the entire island, has been cleared in dolomite valleys and flysh belts, adequate for farming. Bare rocky ground is interspersed with underbrush and garrigue; lower belts are covered with holm oak, Aleppo pine and other species.

There are no surface water streams on the island; smaller sources spring out at the point of contact between dolom-ites and flysh marls. The only larger source is near Jelsa, from where the waterworks runs toward the town of Hvar. Most of the villages developed around Velo Polje; larger places are found along the coast (Hvar, Stari Grad, Jelsa, Vrboska). Economy is based on tourism, farming, viticulture, olive growing and especially on cultivation of rosemary and lavender; fishing is an additional occupation of the rural population.

The island of Hvar has three fish canneries (Sucuraj, Vrboska and Hvar). Tourism is especially developed in the town of Hvar and in Jelsa; modern marinas are built in Vrboska and on the Pakleni Islands. Major places on the island are connected by the regional road (Hvar - Stari Grad - Jelsa - Bogomolje - Sucuraj). Ferry lines via Hvar, Sucuraj, Stari Grad and the cove of Vira.

The island of Hvar was populated already in the prehistoric times (caves Grapceva and Po-krivenik, with painted pottery). The island was later inhabited by the Illyrians, who came into conflict with the Greek colonizers in the 4th century BC. Numerous tumuli on the island are of Illyrian origin. Similar as the islands of Korcula and Vis,

Hvar accepted the Greek settlers but was the only one that had an Ionic settlement (Pha-ros, today Stari Grad). The remains of the ancient colony include parts of walls, graves with pottery of Apulian origin and numerous inscriptions. Hvar played an important role in the Roman-Illyrian conflicts, when its rulers (Demetrije Hvaranin) tried to preserve its independence.

In Roman times Hvar lost its earlier importance. On the collapse of the Roman Empire, Hvar came under the Byzantine rule, as well as the entire Dalmatia. In the 7th century it came under the Nerentani (Narentini), with whom it joined the Kingdom of Croatia in the 11th century. In the following centuries Hvar recognized the sovereignty of the Croatian-Hungarian ruler, the Bosnian King Tvrtko, the Split Duke Hrvoje, the Dubrovnik Republic, Venice (1278-1797, with an interruption in the period 1358-1420), France and Austria.

After the First World War, together with the entire Dalmatia, it was annexed to Croatia. In the 16th and the 17th centuries Hvar was a prominent centre of the Croatian literature (Petar Hektorovic, Hanibal Lucic). The town of Hvar and other towns and villages on the island have numerous architectural and cultural monu-ments, which bear witness to outstanding artistic traditions of the island, the economic prosperity of its population and the relations Hvar used to maintain with cultural centres of the past centuries.